Ask questions before buying our plans or request a new design. Anybody can post here
Post Reply
27 posts

Having constructed the OD 16 some years back, I'm looking for another project. Specifically, a boat w/ a LOA of 19 to 20 feet that has the XF 20's shallow water performance but can handle the chop like the OD 18. Questions, can the rake and sides be increased on the XF 20? Or, can the OD 18 have its LOA increased and incorporate the XF's tunnel? The boat will be utilized on the Texas Coast from Galveston Bay to South Padre Island. Thoughts & Comments? Thanks....

It seems there has been the statement that the plans can be scaled 10% without major issues.
It would cause issues with the piece layouts on the plywood though.

I am currently working on an OD18 with lowered freeboard and raised decks for fishing the Texas coast. My GF18 is great for floating shallow, but is rough and wet going across the bay.

I have often thought a 20' or 21' OD with a tunnel option would be a big seller in this area. Everybody seems to gravitate to 21 foot boats, now even the 23s are gaining popularity for bay and flats fishing.
Top

An OD18 with a tunnel will not work, sorry. There is not sufficient lifting area in the stern.
Plus the OD18 has a lot of windage to fish the flats.
To raise the sides of the XF20 is possible but that boat will never handle a chop well, that's the price to pay for shallow draft.

How about the PH22? That one seems to fit the bill. It's large, takes a chop well, still very shallow.
It cost more and require more HP.
Or the PH18?
Jacques Mertens - Designer
http://boatbuildercentral.com
Top

I to have been thinking along the lines of what Clinkster is thinking about. Most of the bay boat builders in Texas are now building boats that are called "Cats". For the most part they are not true cats but more like a monohull with a tunnel of varying sizes. They sacrifice static draft for a smooth ride in choppy conditions. Claims made about how shallow these boats run vary from 1' to less than 6". If you look at pics of these boats on the trailer, then sitting in the water it would be easy to buy a 10" draft and the ability to run up on plane in a foot and a half. The TX18 design kinda fits the bill but I don't think it will run this shallow because it doesn't have a tunnel. I wonder if a guy couldn't build a XF20 with a full length tunnel and the flared front to trap air like the Flats Cat. The boat could have a sole flush with the gunwale or perhaps down a little. I realize that there are structural issues and calculations that would have to be made, not to mention an aerodynamic and hydrodynamic eval to determine the correct shapes. Using Jaques method and simply copying an existing design would yield better performance than a mold built boat due to the weight savings. Many boats built like this in Texas are being run at speeds in excess of 80mph. I have no interest in going that fast but an efficient boat say upper 40s with 100 to 150 hp could be interesting.

Randy wrote: have often thought a 20' or 21' OD with a tunnel option would be a big seller in this area. Everybody seems to gravitate to 21 foot boats, now even the 23s are gaining popularity for bay and flats fishing.

Why do think everyone is out to get you?

What Seth meant is this: True flats boats are build for one reason....To run in shallow water. So there's no compromise, because to take them offshore is just poor seamanship.
True offshore boats are built for the entire opposite reason.....To run in deep water safely. No compromise, because to try to run them in 6" of water is just as poor seamanship.

He is saying that boats like the PH22, OB17/19 and probably even C19/21 are a compromise in that they do both shallow water and deep sea pretty well, but they don't do them as well as true flats boats or true deep sea fishing boats.

Clinkster asked a great question, and one that deserves to be answered appropriately. So check your attitude, and try to keep it somewhat sane around here.

GV15, D4 done! Dreaming about the next one
Top

thats right, all boats are a compromises.

The trick in yacht design is to make the very most of the necessary compromises. A few years ago Jacques put out the TX18 as an answer. I think you should look at the PH22, and possibly the TX18. Both have relatively low draft, a lot of capacity, and can take chop
www.boatbuildercentral.com
Top

Joel, I agree with what you say about using the existing designs because they are no doubt good.. As a business guy I think you guys are missing the boat (sorry) by not having a tunnel boat in the 20 to 23 foot category. I think a little market research in Texas would show you that it is costing you money and will continue to cost you money until you have one. Down there they are the rage.
With regard to using existing designs, we have. I have a GF18 and brother Dave is getting real close on his TX18. We will soon know a lot about how both of these designs perform. We will try to collect and share info in an organized fashion so that future builders will know what they will do. I like my GF and I may really like the TX18. If the TX18 will go almost as shallow as the GF18 I may build one of those the next time. Having said that neither is 20' plus and that's what A bunch of guys in Texas want, they're buying them right now at over 40grand a copy. I think it's safe to say there is something substantive to their basic design.

Hey Paul I would be interested in the boats that are being used down there. Are they production boats or home builds like ours.?

Flats boats can be very specialized as noted above and full of compromises.
Good fishing and red skys at night sailors delight
C17ccx, Mirror Dinghy
Top

This Cat boat is built by Tran Boats in Palacios Texas. It is a popular design that is available in 18 and 21 foot versions. On these hulls they run the planer fin on the lower unit level with the water which can make the total draft, hull plus motor, less than a flat bottom. They have a smooth ride in chop and have good shallow water performance. I wonder how good a boat like this would be if it was built using our method. It would be probably 30% lighter and would require less horsepower to acheive the performance these guys get with larger motors. Note!! It looks like a TX18 from the front, it differs in that the tunnel is carried through the transom. 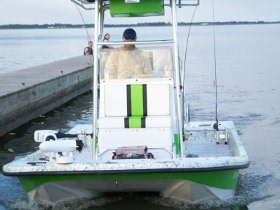 Neat Paul good looking boat. Basically almost a catamaran then. Let me check them out vs what we have in the Bateau catalog. Paul looking at them I'm seeing a draft of 6" when at rest. When at full power they can run in inches of water. Something similar to Davids TX18 or worse. They are definately nice boats.
Good fishing and red skys at night sailors delight
C17ccx, Mirror Dinghy
Top
Post Reply
27 posts

Return to “Questions before purchasing the plans and announcements..”