Please feel free to use the gallery to display multiple images of your progress.
Post Reply
15 posts

My son and I started on our D5 build on Friday. This will be a small and fun kids boat for fishing, casting and exploring. I'll be putting a 34lb thrust electric trolling motor on the transom and the boat will always be car-topped.

I will also use it as a tow-along behind our kayaks for increased cargo capacity on longer distance kayak/canoe camping expeditions. I'm building her as light as possible without skimping on anything. A true work-boat that will also look nice. It'll be painted inside and out, used on local lakes and rivers, nothing outrageous.

Some pics. (Stitching will come in a bit more, I'd left everything rather loose until I had it fully assembled.) 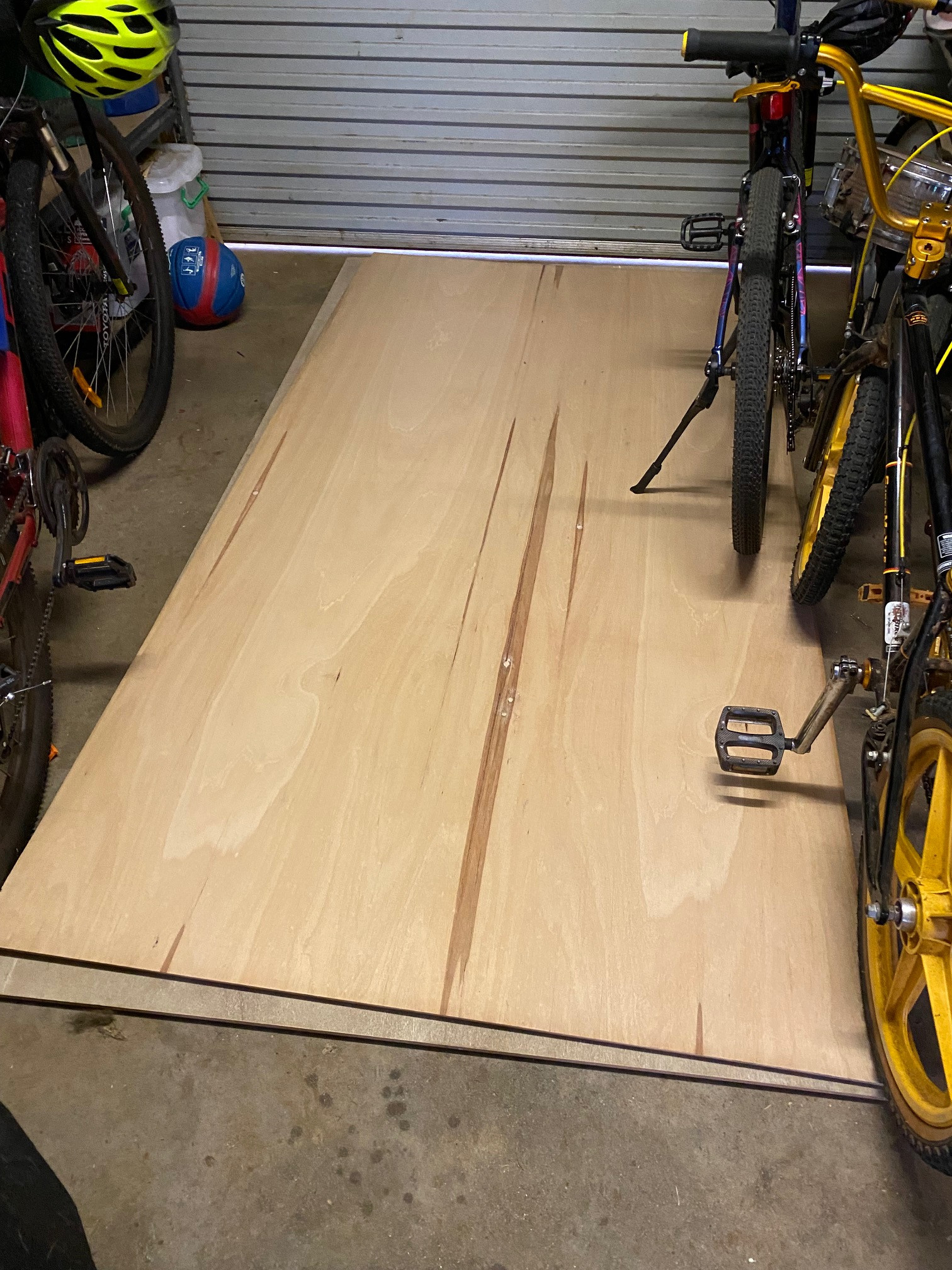 Marked and cut out 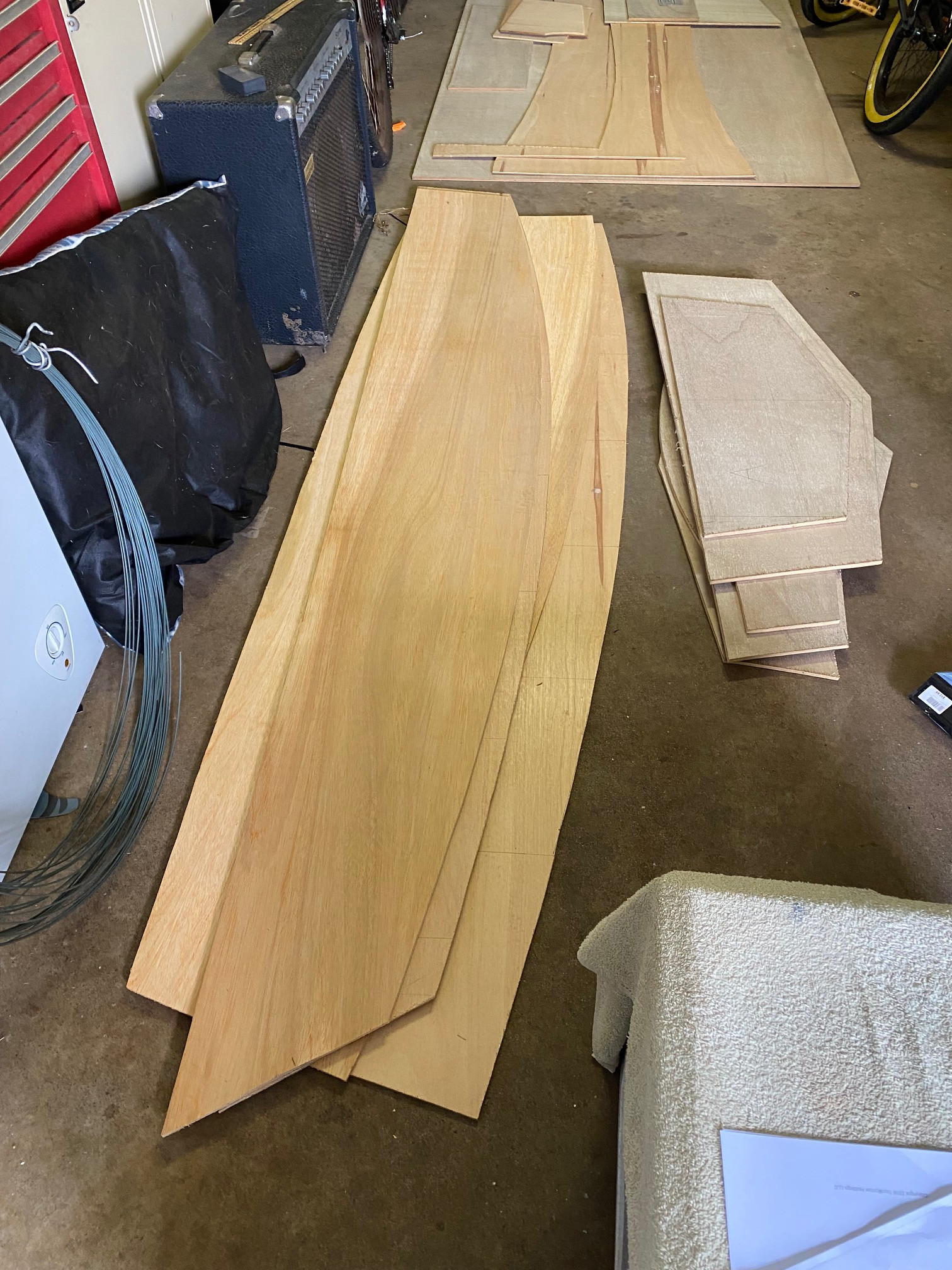 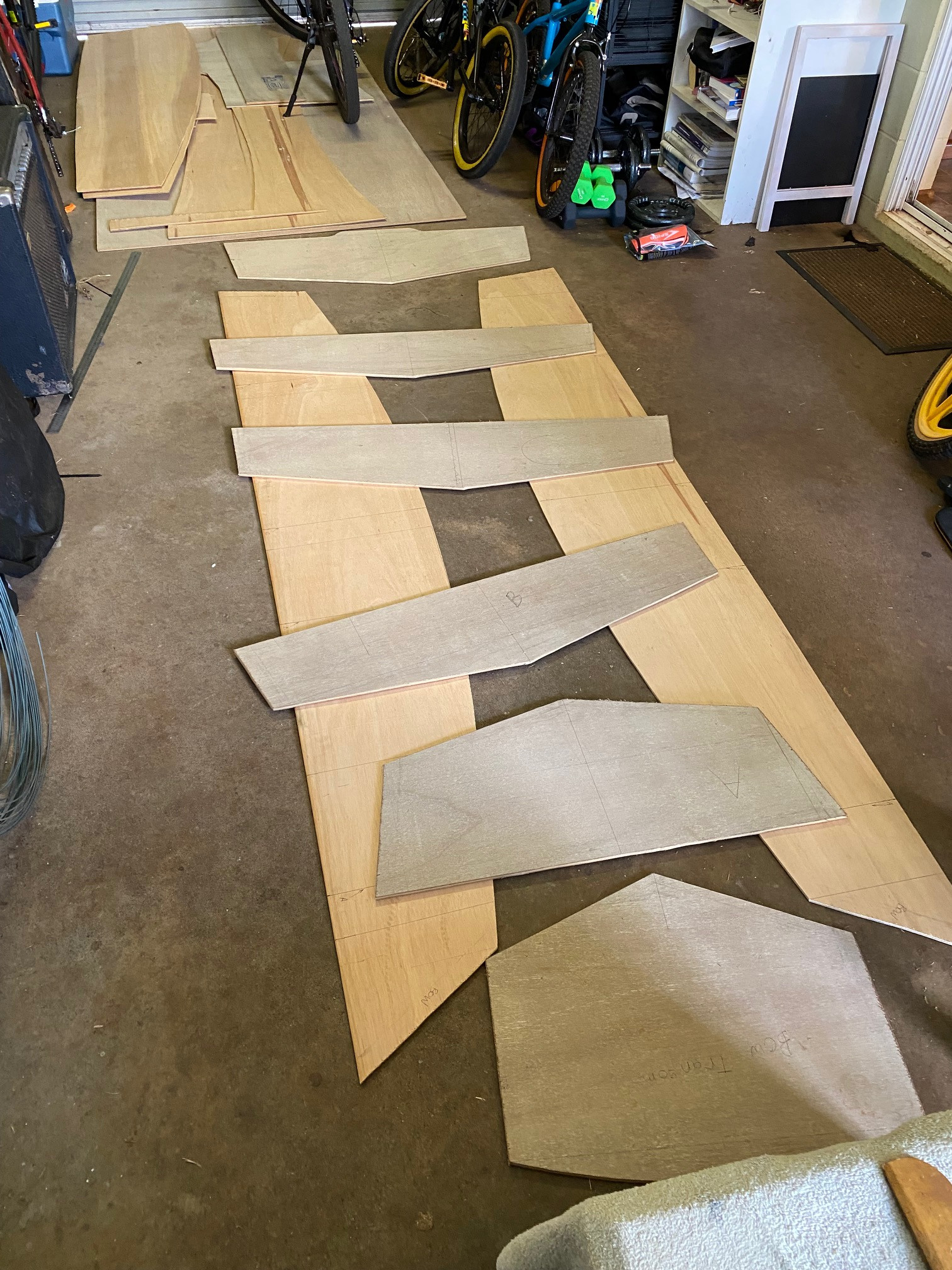 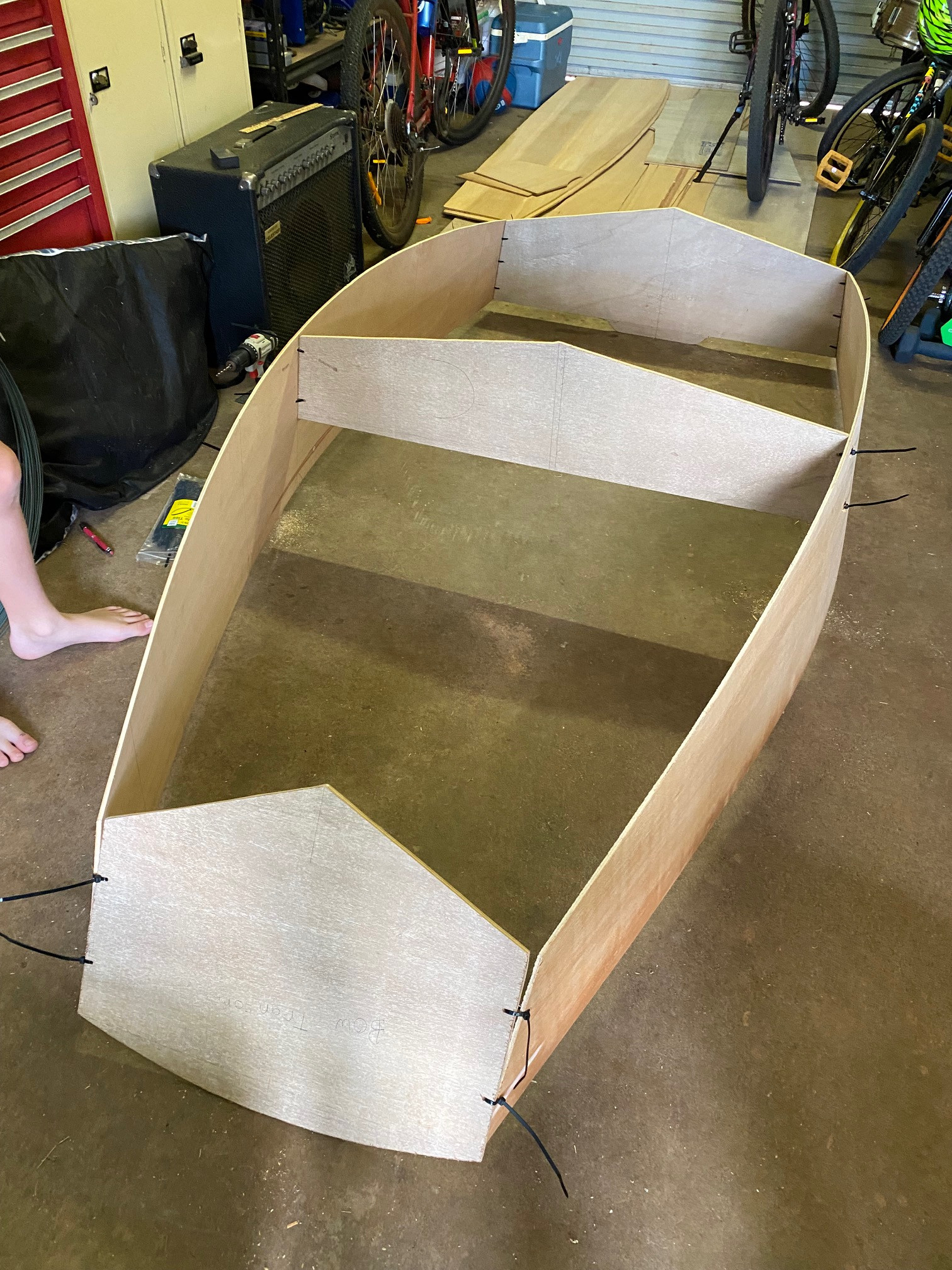 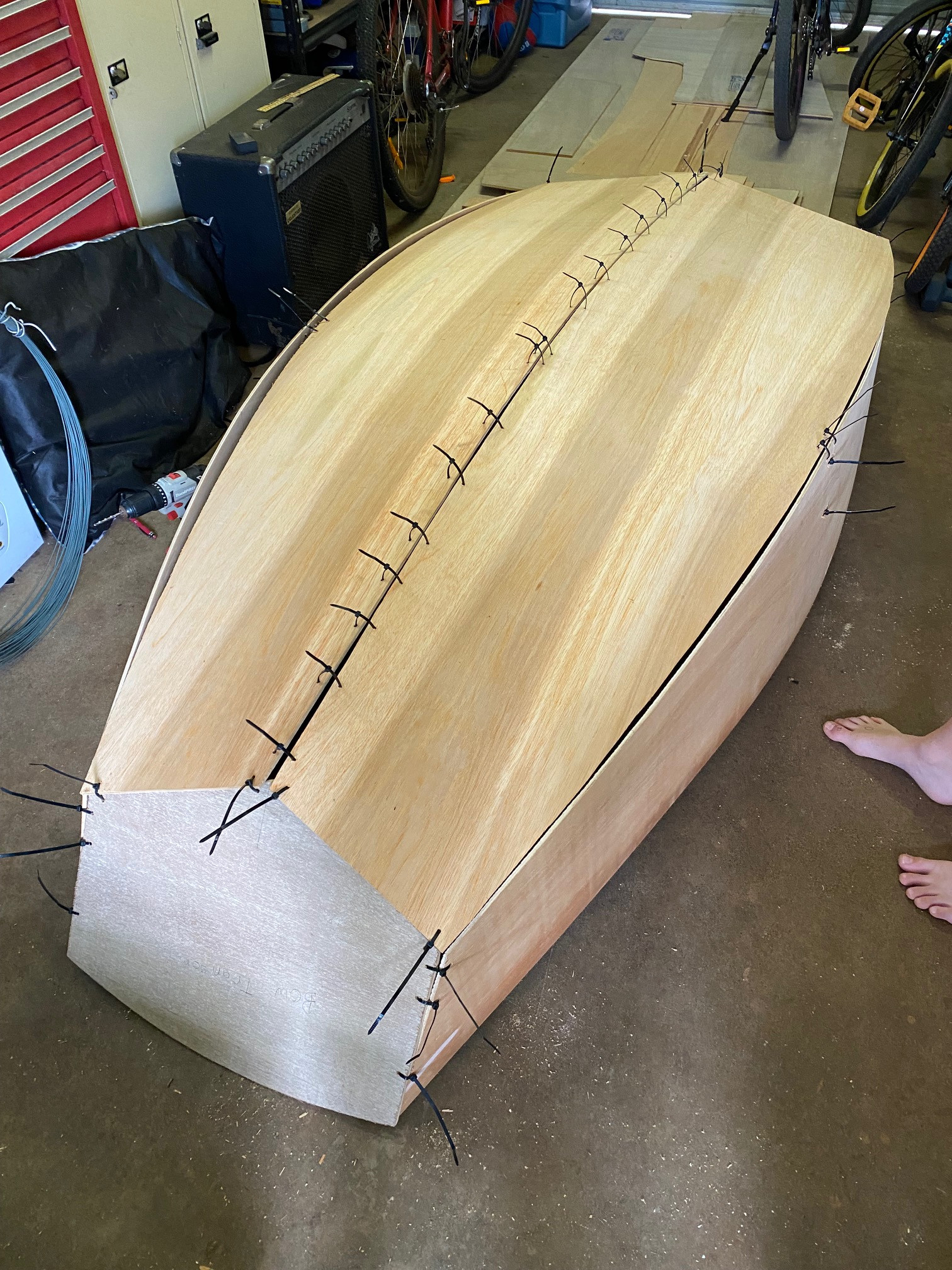 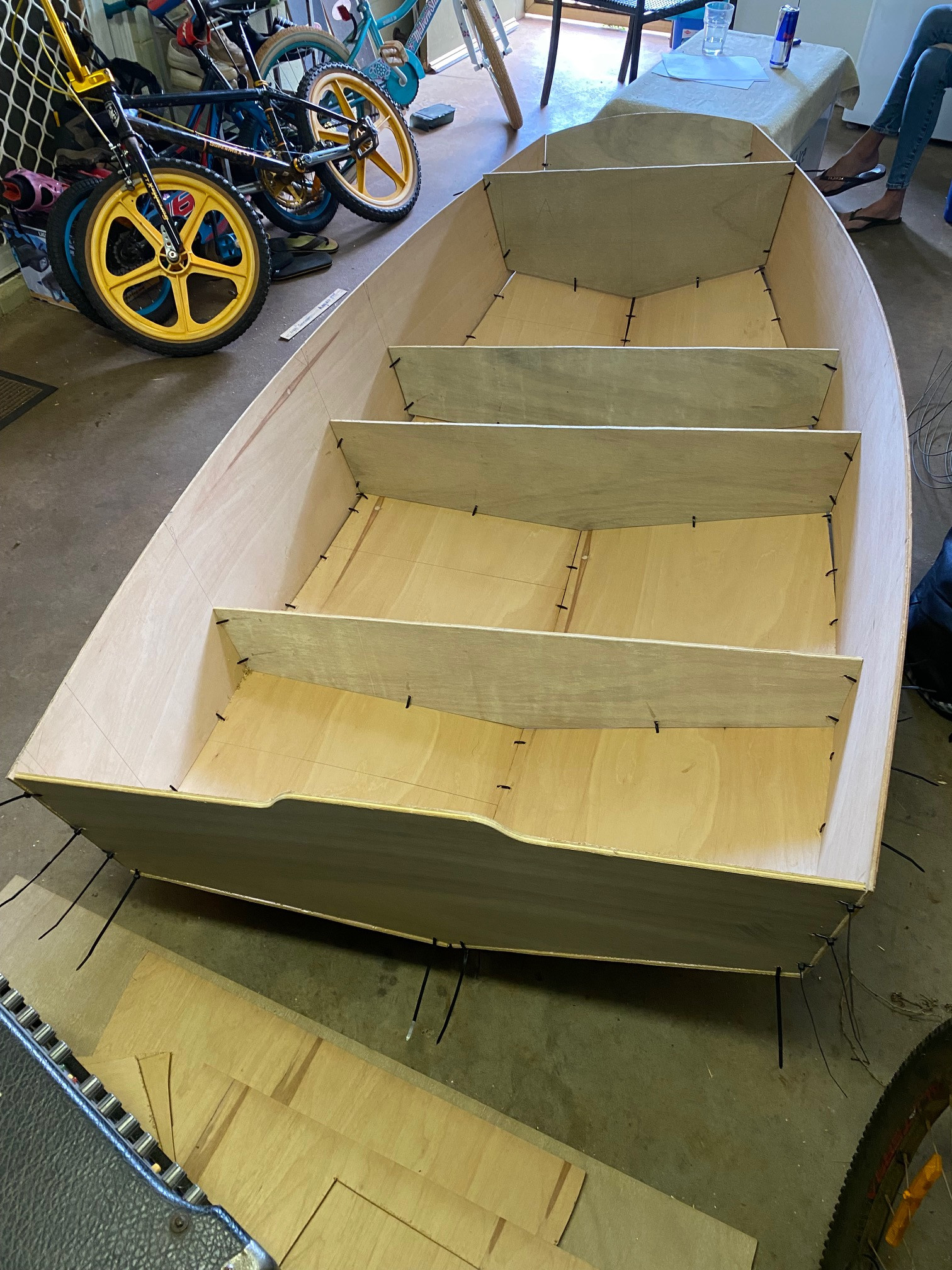 Hope you're all well.

With all those kids' bikes, does that mean you have a few helpers?
"that it isn't just an ordinary sort of boat. Sometimes it's a Boat, and sometimes it's more of an Accident. It all depends." "Depends on what?" "On whether I'm on the top of it or underneath it."
A. A. Milne
Top

Gotta be happy with that though, they were all too young to help build the last 2 boats.
Completed:
CC14 Canoe
V12 Sailing Dinghy
In Progress:
D5 dinghy
Top

Well you are a lucky fellow if you get one that will in fact help.

Sure is fun when you go from a bunch of flat parts to a boat looking thing.
Top

Sure is fun when you go from a bunch of flat parts to a boat looking thing.

The look of disbelief and wonder on the kid's faces when it goes from funny shaped flat bits of ply to something resembling a boat is priceless, Fuzz.

Thanks mhd, my son will keep me moving on this build, there will likely be no breaks. He wants it done by September and insists we do something on it every day (let's see if that enthusiasm lasts when we start sanding)

Having said that, I'm doing little-to-no fairing on this build. I'll sand ugly bits - joins, edges, things that need it, make sure it's smooth with nice round edges all round, but I'm not doing countless hours of fairing this time as the program is for something that looks nice from 6-10 feet away and gets my kids out on the water having fun. Nothing flashy. I will use a good 2 pack paint though to add some durability.

I told him end of October. As soon as my resin and glass turns up I should have good daily progress pics for everyone.
Completed:
CC14 Canoe
V12 Sailing Dinghy
In Progress:
D5 dinghy
Top

Cut out 2 knees and 2 clamping boards for the electric outboard, then I pretty much disassembled the whole thing so I could trim a couple of the frames. Everything already fit together quite well but there were a couple of spots where there were half decent gaps, so to save on resin I figured I could get them a little closer and still leave adequate gaps for thickened resin to run into for strength.

Now I saw it discussed in a previous D5 build thread about leaving the topsides straight instead of the curve that's in the plan, and the last guy who suggested it was talked out of it. Well I have left my side panels straight across the top. I think it looks fine, good actually and the boat won't be rowed so I don't need those tops slightly lower as per plans to accommodate comfortable rowing. Whether this makes rubrails easier to install as well is yet to be seen, but was not my primary motivation.

I also squared off the bow transom, I want the boat to lie flat and still for storage and transport when upside down and not rock so I've made it so. The boat will only be used on lakes and dams with quite light loads and in mostly good weather so I don't see an issue with how I shaped bow and stern transoms.

Anyway I have everything looking really tight and clean and can use some matchsticks under the frames to give that little gap for resin flow to make sure everything's solid.

According to the postage tracking, my resin and glass will be here mid week so hopefully by week's end I'll have a sealed boat to show, and can start on appendages, seat tops and finer details. 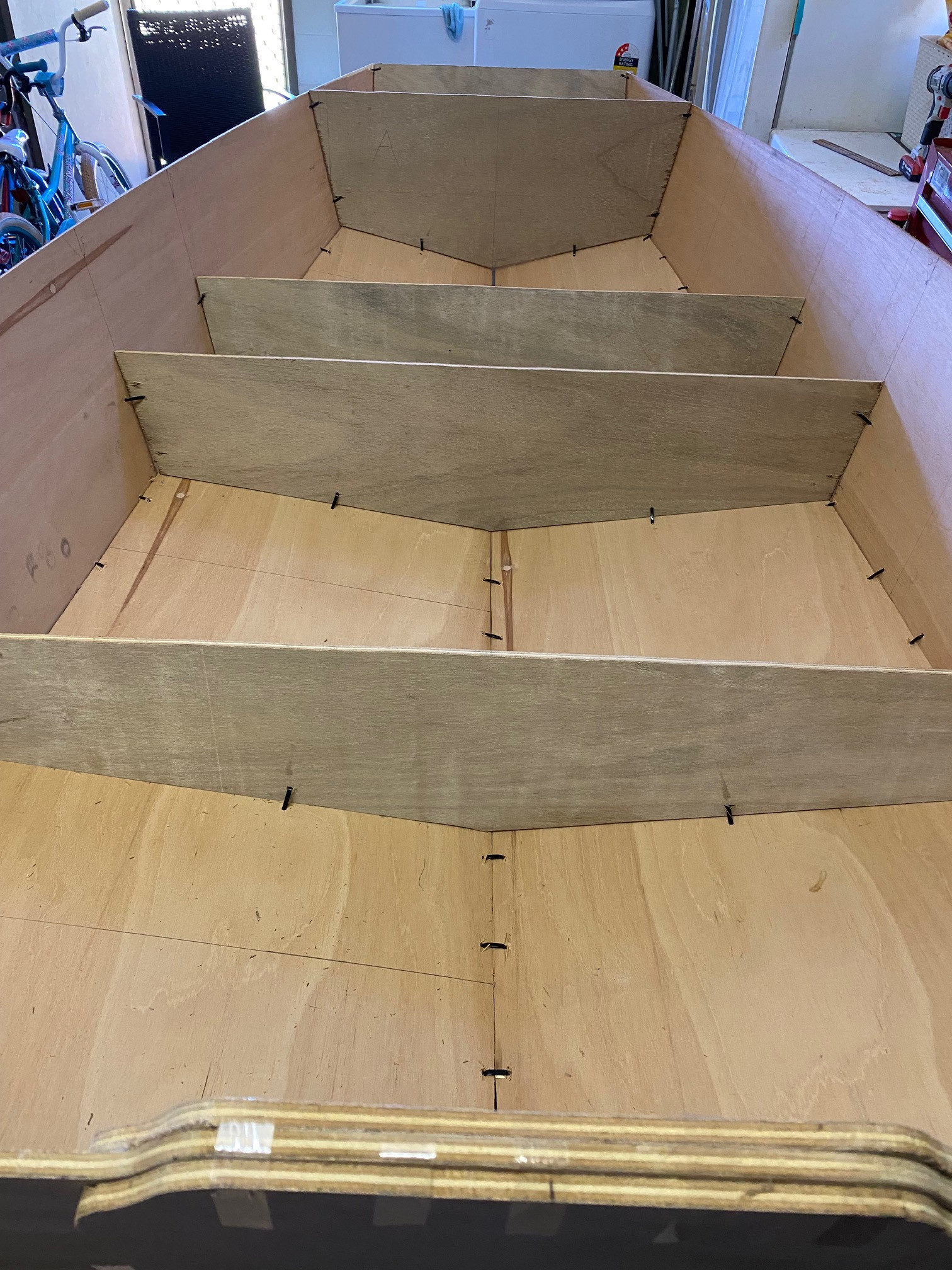 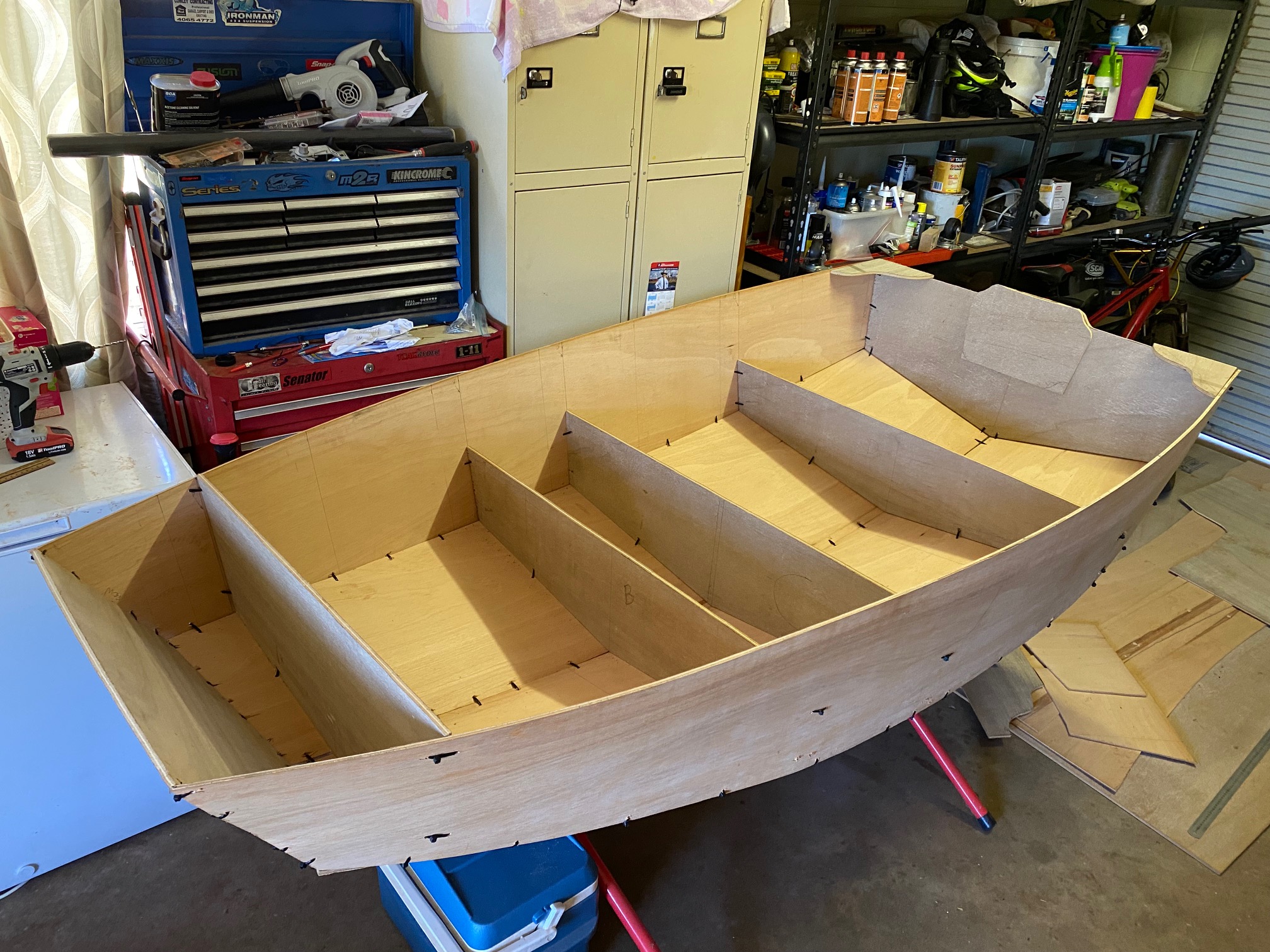 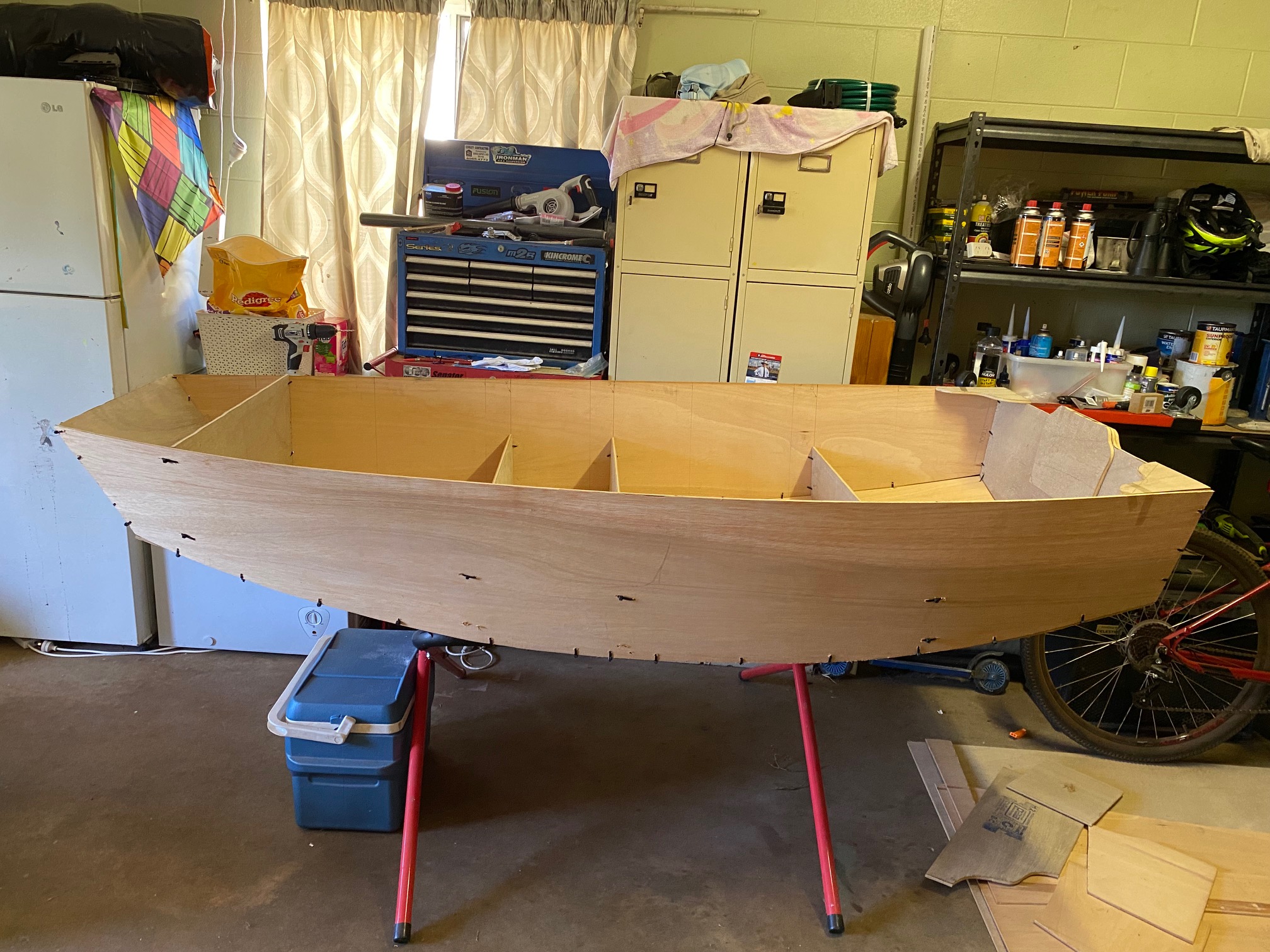 Your work looks so neat, and all your panels are fitting perfectly!

It isn't too important on a small boat like this, but you would also benefit from a bit of gap between hull panels, too. You may have planned that and not mentioned it!
Hank
Top
Post Reply
15 posts

Users browsing this forum: No registered users and 2 guests